How Can You Become a QLD Firefighter

How Can You Become a QLD Firefighter When Applications Aren’t Accepted?

The competition in Queensland (QLD) is high, and they have so few jobs available that they have issued a cessation in accepting applications for firefighters. Applications received after August 1st, 2013 are being returned to the sender, they aren’t even opening them.

Becoming a QLD Firefighter has just gotten much harder.

However, there is still hope. In June 2014, the Commissioner QFRS will revisit the situation and make a judgment on whether or not they will reopen applications. Should they decide in favor of reopening, expect a flood of would be firefighters sending their application in. If you are serious about becoming a QLD firefighter, you need to begin preparing today.

The minimum requirements for applying are rather lax and will not serve as a roadblock for many people. Ensure that you have completed grade 12 (or equivalent); and also hold a Class C (manual) driver’s license or a manual MRV license and First Aid Certificate that will not expire within 4 weeks of sending in your application. To be safe, ensure they are valid until September 2014 at the minimum.

There are ways to ensure you are head and shoulders above the bulk of the applications, like passing the psych test, or by preparing for some of the physical tests. Of course, learning how to become a firefighter is our specialty at firerecuitmentaustralia.com.

Even if the commissioner decides against reopening Basegrade firefighter applications, applications for auxiliary firefighters remain open. You can take this route to gain training and a year’s worth of firefighting experience while waiting for permanent, full time Firefighter positions to open up.

Auxiliary firefighters have some additional restrictions put on them, since they are part time and on call 24/7 they must live within a 5 minutes drive from the station they will be supporting. They are also encouraged to have regular jobs outside of the firefighting industry. Their employers must understand that they may have to leave at a moment’s notice.

Even though recruitment for full time firefighters is closed, there is still preparation and alternate routes for you to take. In QLD, you can still become a firefighter, if you’re willing to work for it.

This article was written on the 5th of January 2014.

After becoming a Firefighter, I developed a massive interest in the Fire Services Recruitment and Selection Processes. I've been in the fire service working since 2007 to learn everything about how Fire Services Recruitment works. I've tested and refined proven methods to help people get the edge over the competition. Today, over 300 of my former students are living their Firefighter dream. 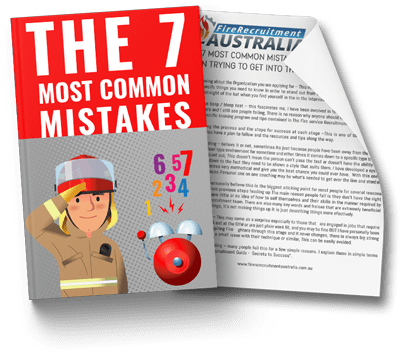